Christmas Day 1969....in England and in Vancouver BC 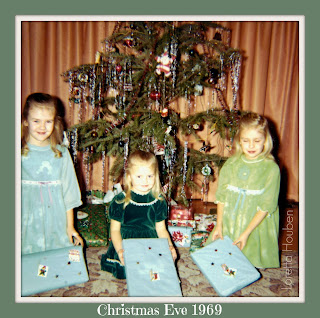 While my Grandma was enjoying herself in England far away, my sisters and I were having fun too on Christmas Eve. Well, I assume Grandma enjoyed her visit, although her poor little notebook is filled with descriptions of cold, illness, snow etc.

Back to the notebook:
Thurs Dec 25, 1969
Christmas Day
" Got up and had Christmas dinner with Gin and Bert."

Sat Dec 27
"We motored to Bristol to visit Harry. A four to five hour drive. I'm staying at Harry's, from Bert's place."

Sun Dec 28
"Harry drove us out to Worle, an hour's drive. It's in Weston Super-mare, to visit Isabel (Gordon) at her aunt's. We went to a very old stone church; St Martin's, built in the 11th century. The pew seats were 800 years old. Monks used to use it. The Lord's Supper all in alabaster, sculpted most lovely. I left a tract there."

I tried to find out more about St. Martin's Church, but there isn't much on the internet. It's still an active church, and I saved a few photos from the website. I will post them down below. 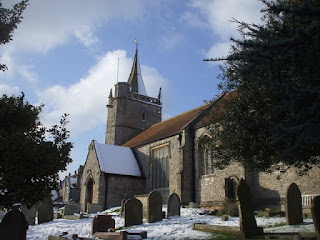 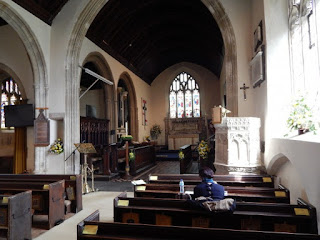 Inside the church which Grandma visited in Dec 1969. 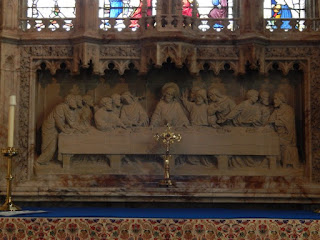 The lovely alabaster carving of the Lord's Supper. I can find nothing out about it. 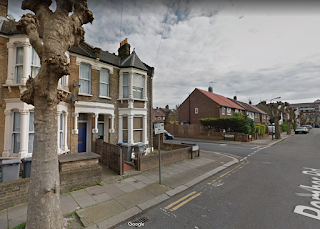 28 Pember Road in Kensal Green, London England.
Where Eleanor and her daughter Vera lived in 1965, according to the voter's list from Ancestry. In this year, a Melvyn Simpson also was living with them. Now who is he? A son? 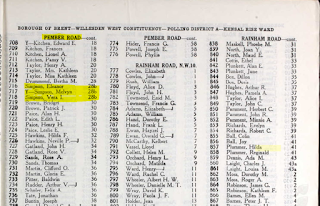 From Grandma's notebook:
Sat Dec 20, 1969
"Visited Elynor. Cold drafty house.
Elynor, Vera and I went shopping in Kensington. Bought a skirt for 2 pounds, 15 shillings. Elynor has 2 cats and a French poodle dog. Bought a pair of pillow slips for 3/11d each. Took a cold there and was sick in bed 4 1/2 days."

Sun Dec 21
"Wind blowing hard, raining hard, sick in bed in the night. Took 2 buses to Bert's house. Cost me 3 shillings. We have to pay cash on every bus. No transfers here."

Poor Grandma! She certainly had a miserable week.
I'm delighted, though, that her notes confirm she visited Eleanor and Vera. If only she had a picture of them together! I have no photos of either. Eleanor lived on Pemberton Road for a long time, since the 1940's, renting, so I assume if she was there in 1965, she must have been there in 1969. But the voter's lists only go up to 1965 on Ancestry. 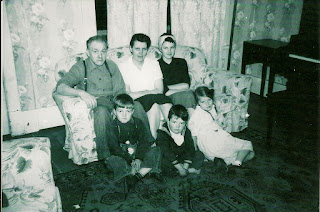 This photo isn't from 1969...but it shows Grandpa and Grandma, their children Audrey, Bob, Dennis and Ruth at their home on E 22nd Avenue in Vancouver BC. (circa 1954 or 1955)
Here is some more of my Grandma's notebook from December 1969 and her memorable trip to England and Wales.

"Sunday Dec 14, 1969
Bad weather, very windy and raining and the jets going over our house, one plane a minute on account of airport. Bad weather conditions, awful noisy here. House cold as a barn but have electric heater and blanket in bed still cold. Only one fire place in house. Three bedrooms upstairs. 50 miles an hour wind. Slept on and off all day Sunday until 6:45 pm."

"Friday Dec 19, 1969
Went to Hampton Court to visit house. Wonderful place. Cost me 4 shillings bus fare then went by train to Kensal Rise to Elynor's. Cost me 1/6d train fare. Very cold house, drafty. Elynor pays 4 pounds a week rent. Used to be 10 shillings a week and 9d for gas. I'll be glad to be home again. Too cold in these houses."

I believe Elynor must refer to Grandpa's sister, Ellen. Her first name was Elizabeth, but she was known by her middle name. I don't know of any other Elynor in the family. Grandma always misspelled names! Elynor is Eleanor. This is a 2015 Google map snip showing 28 Pember Road where Eleanor and her daughter lived for a while according to the voter's lists which I've found on Ancestry. 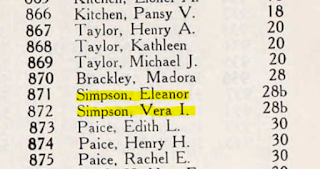 The above list is from 1953. This is located in Kensal Rise, so it may have been where Grandma visited, if Eleanor still lived there.

December 1969...my Grandma's visit back home in England. 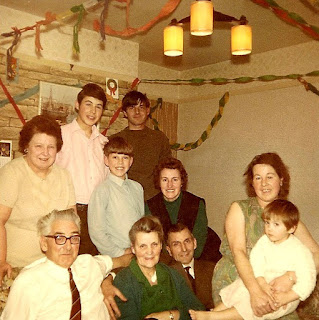 Christmas 1969
My paternal Grandma, Alma May (Palmer) Williams was given the opportunity to visit England for the first time since 1927, forty two years previous! She had a longing to see her Dad, Herbert Palmer, who had gone back to England in 1932 with his two young children, Harry and Violet, the twins aged 9. His first wife, Florence, had died in Humboldt SK at the age of 47. His 5 years of living in Canada had ended sadly. 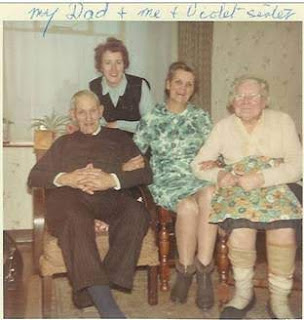 Here is Herbert Palmer with his 2 daughters from his first wife, Violet and Alma May. On the right is his second wife May by whom he had another daughter, Veronica.
I have a small notebook of my Grandma's in which she's written a few notes of her trip to England in Dec 1969.
I thought I'd write them out here.

"I left Canada for England on Dec 12th, 1969. Bus reached Seattle after 12. Plane left airport at 2:45.
Landed in Ireland at midnight, 9 English time.
Board plane 10:20 in Ireland. Left airport Vancouver time at 2 am in morning. Very shaky plane ride. Landed at Gatwick airport 11:45 pm English time.
Nobody at the airport to meet me. Waited nearly 3 hours for Bert. Nobody came.
At the airport my name was called out over the loud speaker for me to come to the desk. The man asked me if I had lost my purse. I said no. He said 'Is this yours?' and lifted up a man's hat and there was my wallet! I had forgot to pick it up at the wicket where I changed my money into English money. All my money was in it. I was shocked. I said thank you so much. He said that lady over there saw my wallet and brought it over to him. Oh, what an honest woman!"
Can you imagine Grandma losing all her money? Maybe she had a head like a sieve back then! She was 61 at this time, soon to be 62 in January. She traveled alone, and it was her brother Jack who kindly paid her airfare so she could make this trip. It was a very cold and snowy winter, with a flu outbreak. Poor dear Grandma....

Posted by Loretta at 9:14 AM No comments: 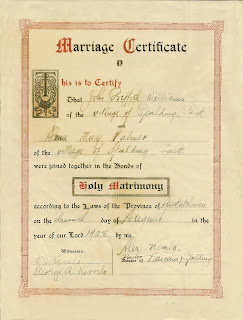 90 years ago, on August 11, 1928, my paternal Grandparents, John Griffith Williams and Alma May Palmer were married in Naicam, Saskatchewan at the Pastor's Manse. 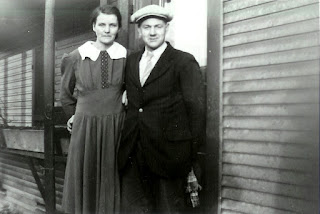 They had eloped from Spalding Saskatchewan in John's horse and buggy, but they had to wait until nearly midnight as Pastor Kemlo wasn't home!
The photo above was taken in Vancouver BC in 1942. There are no wedding photos, nor was there a wedding dress. I think my Grandma's mother didn't want her to marry a man who was 20 years her senior! But the marriage lasted until 1974, when John passed away in June. They were married 46 years and had 7 children.

This is the link for death certificates in British Columbia.

(I keep losing this link)
Posted by Loretta at 3:22 PM No comments:

My Grandmother's school in South Wales. 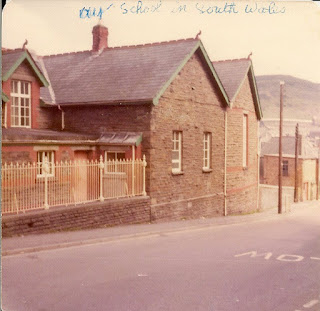 This photo was taken in 1969 when my Grandma, Alma May (Palmer) Williams visited Penygraig, Wales.
I never knew where this was when I visited in 2007.
I didn't even know the name of the school! 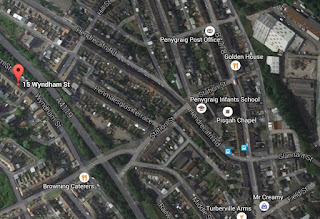 So back in 2015 I looked up where schools would be on Google map in relation to #15 Wyndham Street where the Palmer family lived at the time. On September 10, 2015 I was looking at old photos in my Dad's stash, and came across the one at the top of this post. I zoomed in on the photos of the schools but nothing looked like my photo.
So I then searched Google images of the two schools and found this one, which is identical! 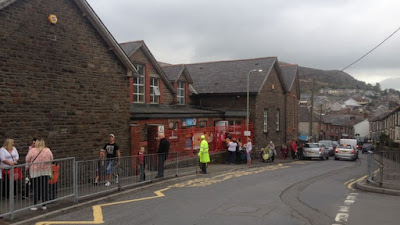 I knew I'd found the school!
It's Penygraig Infants School at Hendrecafn Road in Penygraig, Tonypandy RCT CF40 1LJ

I thought I'd blogged about this, but I hadn't so it took me some time to wonder if I'd put it on my Williams/Palmer family Facebook page, and lo and behold I had, way back in September 2015! I checked in the photos and then scrolled back 2 years. That was a job!
But here is the information. My Grandma's siblings would have attended this school too.